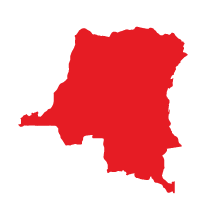 Introducing a naturally processed Blue Mountain varietal from DR Congo. This coffee is super unique with tasting notes of blackberry, lychee, cucumber, honey, and grape. From smallholder farmers in Kivu, a coffee region on the eastern edge of the Democratic Republic of Congo, this coffee was produced by Virunga Coffee Company on the outskirts of the Virunga National Park which is home to 1/3 of the world’s endangered mountain gorillas.

The Democratic Republic of Congo is fairly new to the specialty coffee growing scene in recent years. While Robusta coffee has wildly grown in the country for hundreds of  years and the DR Congo was once a major exporter of coffee in Africa (peaking in the 1970s), years of tumult and political instability have taken their toll on the country. Beginning in the 1990s, years of seemingly endless civil wars, corruption, and rebellions plagued the country and made coffee growing/exporting extremely difficult. Coffee production/exports reduced dramatically for a number of years and the country is just recently re-emerging on the scene as a player in specialty coffee. The focus now has shifted to higher quality Arabica varietals and many groups within and outside of the country (including the Democratic Republic of Congo government) are working to put DR Congo on the map as a producer of high end specialty coffees. This particular lot is a naturally processed Blue Mountain varietal (a derivative of the Typica variety that originates from Jamaica) that exemplifies the unique flavors and quality coming out of the region.